The Star Wars Half Marathon at Disneyland is less than 2 weeks away. I had a blast participating last year in the inaugural Star Wars Half Marathon and wish I could have ran again this year. It was so much fun, so much Star Wars, so much Disney, and so many costumes! 🙂 At this point, I think most people will have their costumes set because why run in boring regular clothes? 😉 However, just in case you need some last minute inspiration or are running in the Star Wars Half Marathon at Walt Disney World in April, I rounded up some awesome DIY Star Wars Running Costume tutorials and linked to even more ideas and pictures from last year’s Star Wars Marathon to inspire you! Whether you go elaborate or simple, a Star Wars costume is a must! 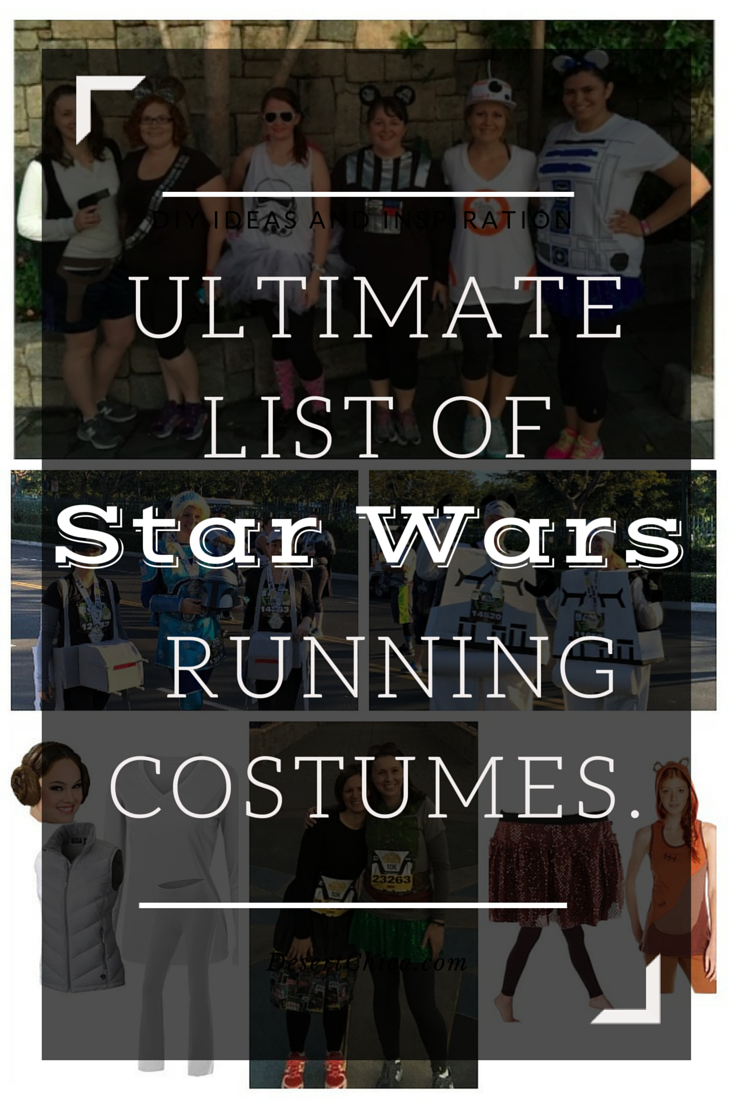 If I was running in an upcoming Star Wars Half Marathon at Disneyland or Walt Disney World this year, then I would work with my Princess Leia Hoth Halloween costume.  It’s an easy and comfy costume, perfect for running in! I actually braided my hair and pinned my hair like Leia’s on Hoth for Halloween but anyone could pull off a Princess Leia Headband . I found my pieces locally at discount stores and consignment stores but Amazon is always easy with prime shipping and returns. Just pick up a white t-shirt, comfy white pants, and a white vest. 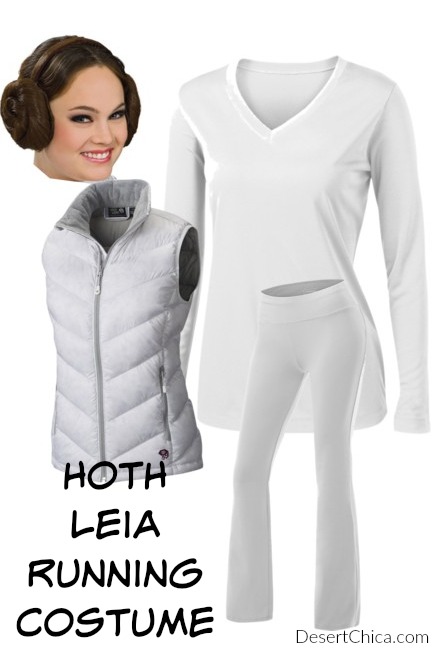 Chewbacca is definitely one of my favorite Star Wars characters and he’s an easy costume for both guys and girls to pull off with a Chewbacca t-shirt or Chewbcca costume tank. Add brown leggings and a brown running skirt and you are set!

R2-D2 is also a fun t-shirt costume idea. Pick up an R2-D2 costume shirt, blue running skirt, white leggings and even a pair of R2-D2 Mickey Ears and you will look adorable without breaking a sweat… at least until you actually start running. Then you’ll likely get pretty sweating and gross. 😉

This Ewok hooded tank is adorable and also perfect for an easy Star Wars running costume idea. Again brown leggings and a  brown sparkle skirt finish it off.

These aren’t running costumes but you can check out our DIY Star Wars Halloween Costumes for more ideas including our own fun BB-8 costume idea.

Be sure to check out these pictures from the inaugural Star Wars 1/2 Marathon at Disneyland for even more inspiration!

I am proud to partner with Get Away Today and share their deals on Walt Disney World tickets and Orlando vacation packages. My family has booked Disney vacations through Get Away Today since I was a kid, so I know it’s a well-established travel agency. Plus they are a Select Tour Operator with Disney Parks and is approved by the Better Business Bureau. They pride themselves on saving families money and helping plan your perfect vacation.

Book online or call Get Away Today at 1-855-GET-AWAY. Mention my promo code DCHICA to get the best prices and you can even save $10 on any 2-night or longer Southern California vacation package. If your trip is a little further out you can use their layaway program and save towards your next Disney trip all year long.

Are you participating in one of the Star Wars Half Marathons? I’d love to hear all about your running costume!!