Last night we attended a cardboard box party at E’s preschool and the boys had a blast. I’ve certainly had my fair share of fun making Dusty Crophopper and Blade Ranger costumes for the boys from cardboard boxes but those were planned projects. It’s so crazy how much fun the kids can have using their imagination, cardboard boxes and other random materials.

When we arrived the boys picked out a shoe box and a starter bag of supplies. It was full of cardboard tubes, stickers and other recycled materials.

There was another table with extra supplies for the kids to pick up as needed.

The boys went to town creating something fun with their box. We saw other kids making castles, rocket ships and cars.

Elliot never really committed to what he wanted to make, he just kept adding cool things to his box. In the end he called it an “intruder gun”. Not exactly sure what that is…. but he thought it was cool. 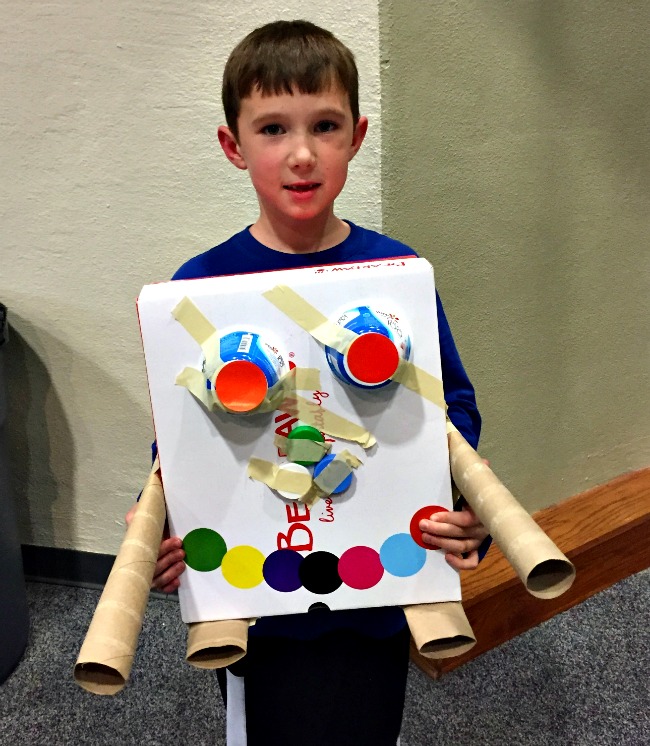 Quinn went with a cool robot. I love the robot’s smile made with colorful stickers.

After they finished their projects, they had a blast playing with big boxes. Crawling through them, hiding in them and building big stacks.

Our preschool event was informal and only lasted an hour, a perfect setup for a playdate or school activity.  I also think a cardboard box party would make a great birthday party theme or earth day celebration too. Just let everyone know you are collecting boxes a few weeks in advance to gather enough boxes for all the party fun.

I thought the activity was perfect for the boys after seeing the BoxTrolls recently. In fact they were telling me about their favorite parts from the movie on our way to the cardboard box party.  So it’s no surprise to see that the BoxTrolls was actually a sponsor of last year’s Global Cardboard Challenge.