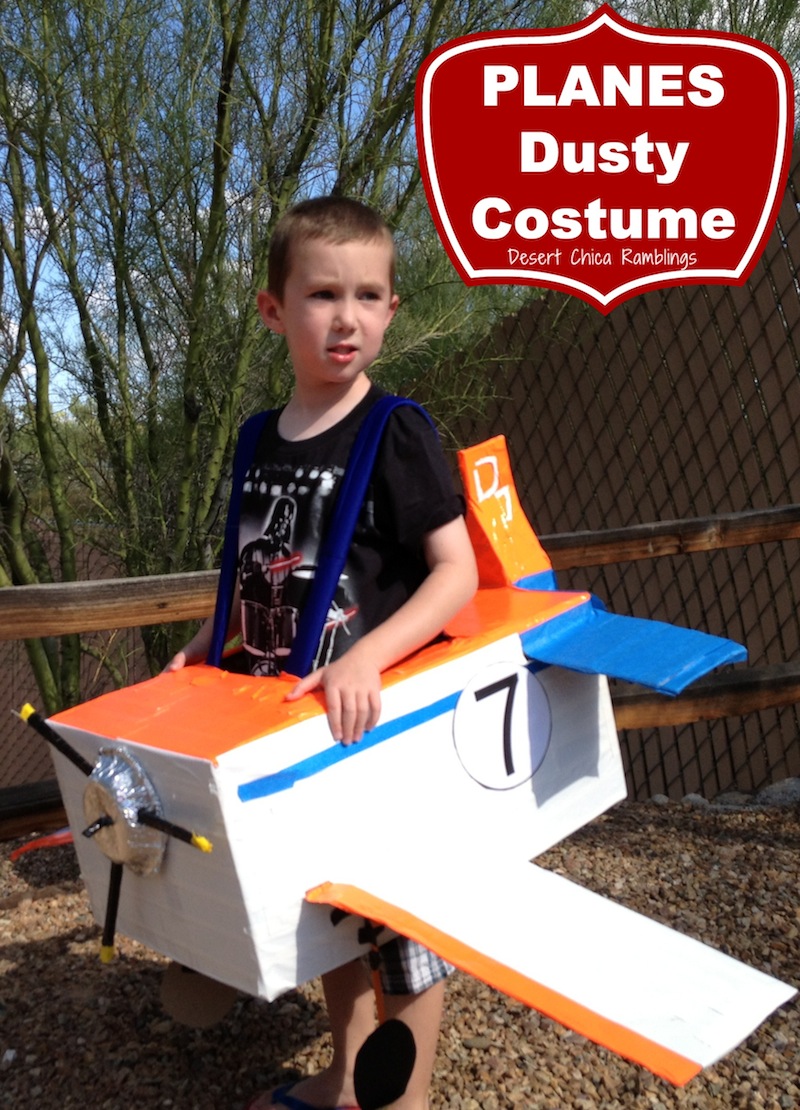 Disney’s Planes opens today and with Halloween around the corner I think some kids may want to dress up as Dusty!  I had to try my hand at making a DIY Disney Planes Costume. We made Dusty Crophopper but I think multiple planes from the movie would make a fun family Halloween costume theme!

I started by collecting big cardboard boxes from random deliveries, Costco etc. The biggest expense was Duck tape, unless you chose to decorate it another way (paint maybe?). I wanted less mess and since Becca’s son Jack is obsessed with Duck Tape, I thought I would give it a whirl.

I have never made a costume or even crafted with cardboard boxes so I impressed myself with how well it turned out. I basically found a couple of pictures of Dusty online and kept referring back to it as I worked. Dusty image above from Disneyplanes.net

I started with a large box (open on one side) and cut out an opening big enough for the boys to fit in. I had Elliot test it out to make sure it was sized right.

I found a piece of cardboard long enough to be the main set of wings and cut it into two pieces. I cut slits on either side of the plane fuselage and slid the wings in place. I did do some rough measuring and sort of eyeballed them to make sure they were fairly even. Don’t worry it’s not rocket science. 😉

I used tape inside the fuselage to secure the wings. My wings seemed extra droopy so I ended up making supports out of craft sticks underneath each wing.

Luckily, I found a piece of cardboard in my pile that helped me envision the back end of the plane. I simply folded up one part to create the triangle shaped rudder. Then cut a slit into the back end of the fuselage (and a little into the sides) to slide the baby wings (or elevator if you wanna get technical) and rudder into place.

I found a couple 12 inch bamboo sticks from an old preschool craft project. I cut them in half and then wrapped each pair in black Duck Tape to create thicker propeller blades.  I think pencils would work here too. We added a little yellow Duck tape at the tips to better match Dusty’s blades.

I covered a small paper bowl with foil to create the propeller base. Then I inserted each propeller blade into small slits cut into the side of the bowl. I used a protractor to make sure the blades were evenly spaced (120 degrees).  Look i’m fitting math into this fun Disney project! 🙂 To secure each blade, I taped the end to the inside of the bowl.

Using a pencil I was able to attach the propeller to the plane while still maintaining its ability to spin.  I sliced a small X through the front end of the fuselage and the base of the propeller (middle of the bowl); just enough to slide the pencil in. Then I wrapped tape around the “exposed” parts of the pencil to make it thicker so it wouldn’t slide in and out. The boys think spinning the propeller is pretty cool.:-)

I think Duck Tape suspenders would be fun but I had scrap fabric on hand to use. I stitched the ends of the fabric together lengthwise to create long tubes.  Then using binder clips, I attached them to the plane The binder clips made it easy to adjust the length. When we were happy with the length, the clips were covered up with the paint (Duck tape).

The wheels are optional and I think you should just skip them. However if you insist, we made a set from cardboard and craft sticks. Visually they work but the wheels will break/bend if you set the plane down on them.

UPDATE: Check out my El Chupacabra plane costume for a better wheel option!

Instead of painting I opted to “tape” my color on with Duck Tape and painters tape. I ended up using an entire roll of white Duck Tape! I also used orange, black and yellow Duck tape on this project. I only found a dark navy blue Duck tape at Target, so I opted to use painters tape instead. Again I just kept referring to the my Dusty picture as I decorated the plane.

I printed the #7 logos using PicMonkey and attached them with double sided tape. I created the D7 on the tail with white Duck tape.

The finished result turned out much better than I anticipated. My boys knew it was Dusty from Planes right away and they couldn’t wait to try it on!

Ready for take off!

My success just proves anyone can make this cool Disney Planes costume and if you are a crafty person, your plane will definitely be cooler! I’m thinking about making Elliot his own plane costume so they don’t have to share.

Which Planes character costume should I make for Elliot?