After the success of our Dusty and El Chu costumes last year, I couldn’t help but create two more this year with the 2nd Planes movie. I wanted to mix things up a bit so first I made Blade Ranger, a helicopter costume and it turned out pretty cute. Today I am sharing another Disney Planes Fire and Rescue Dipper costume idea.

The Lil’ Dipper Costume is very similar to my past airplane tutorials, it’s very easy to make but does take a lot of duct tape and time. The most important thing to do is reference an actual picture of Dipper, so recreate the same details with the duct tape.

Last year I used random cardboard boxes we got from Costco, this year I discovered that banker’s boxes actually worked really well. The lids were utilized for airplane wings and the tail. I was making the Dipper costume for Quinn, who is a big 7 year old so I needed a legal size banker’s box. I turned the box upside down and cut out a hole big enough for Quinn to stand in.

The biggest change to this costume vs. Dusty last year is the addition of sand buckets on the wings to create that bulky red part. I found the buckets in the dollar section at Target. I had Peter slice down the sides (about 1/2) so I could slip them on to the wing. Then I used silver duct tape on the front and red duct tape around the sides.

I created the blades by  cutting wood skewers in half and then duct taped them together (to create a wider blade). I added yellow tape to the ends of each blade. Then I simply used a blade to create a hole in the buckets and inserted 3 blades into each side. 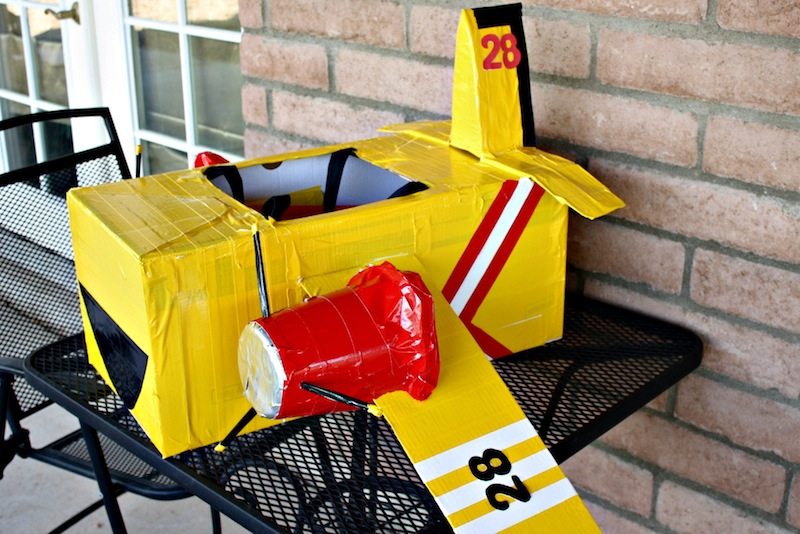 If you’re looking for more details on how to create an airplane costume using a cardboard box and duct tape, reference my Dusty Crophopper costume or El Chupacabra Costume. And don’t forget about my Blade Ranger helicopter costume. 🙂