With the release of the new Disney Planes Fire & Rescue movie, I was itching to create a new Disney costume. Last year my boys loved their Dusty Crophopper and El Chu costumes. Besides being a little time consuming, I was surprised by how easy they were to make. Blade Ranger is one of the new characters in the 2nd Planes movie, he is the leader of the Piston Peak Air Attack team. The basic costume design was the same as last year but with a few key differences because this time I was making a helicopter costume.

I started by looking for good Blade Ranger images to use as inspiration. There aren’t a lot of character stills from the movie online yet, so this toy worked best for me.

It turns out a banker box was perfect for this costume. The box itself was easy to make and the perforated lid edges were easy to cut off and use as rotor blades.  I used the long sides for the main rotor blades and the short sides to create the tail rotor blades. Keep in mind your edges don’t have to be 100% perfect because you will be covering everything in duct tape.

First I attached the main rotor blades to a knit cap using a paper clip. You could try and glue the blades down but I wanted the blades to be moveable. I used a thumb tack to pre “drill” the hole in the center of the cardboard, then I fed the paper clip through the “blades” and the hat to connect the.

Then I covered the both blades with black and yellow duct tape to match Blade Ranger. This secured the paperclip in place but still allowed the blades to rotate.

After harvesting my rotor blades from the banker box lid, I used the main part of the lid to create my helicopter tail. I noticed that Blade Ranger’s tail end looked a little like an asymmetrical fish tail, so I just sketched it on to the cardboard. Keep in mind, I am horrible at drawing but this is a basic shape. You can see I adjusted my shape a few times before I started cutting. Remember you will be covering everything in duct tape so rough edges or pencil marks don’t matter. 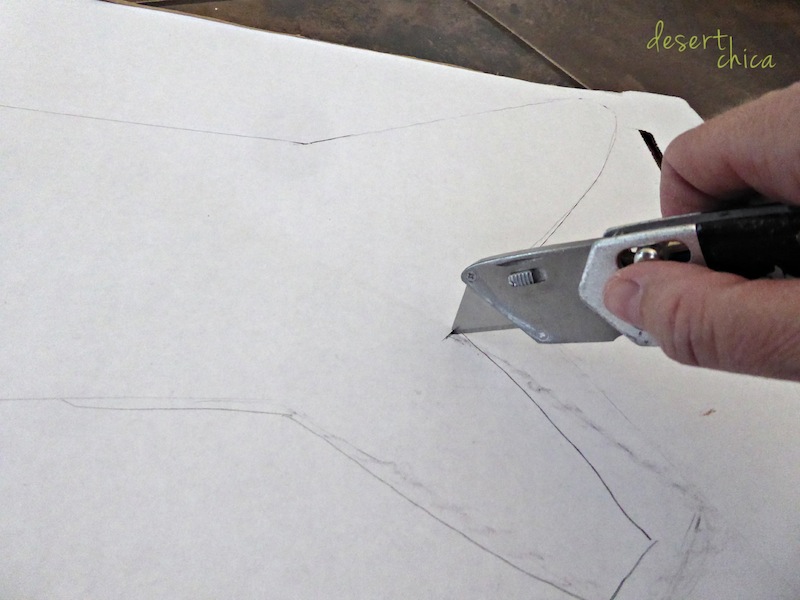 The tail and rotor blades are my favorite part of the costume. I was surprised how well it turned out. Seriously, if I can do this, you can too!

You’ll notice I left the full width of the lid at the front end of the tail. This created a “tab” system that I could use to attach the tail to the box. Just fold the tabs down and then slide the tail into the back of the box. Once it was pushed through, I unfolded the “tabs” and the tail was securely attached to the box. I had planned on taping the inside part of the tail to the box but I found I didn’t need to. The tabs fit just inside the lip of the box, so it doesn’t actually poke into the costume space anyway.

The tail was secured a bit more once I duct taped the entire box to match Blade Ranger’s design.

Once both the tail and tail rotor blades were fully duck taped, I attached them together. I used the tip of a razor blade to start the holes and then made them slightly bigger and more uniform by pushing a pencil through it. Then I used the nut and bolt to attach the blades to the tail. This design allows the rotor blades on the tail to move too.

I used duct tape and my printer to add more details to the costume. This is when I wish I had a fancy paper/vinyl cutting machines, it was tedius to cut out the letters and numbers. I don’t draw well and I certainly don’t use scissors well. This was my least favorite part of the costume but it’s clearly doable. I printed “Piston Peak” and “301” on my printer using a plain font in Pic Monkey. The boys attached them on both sides of the costume with double sided tape.

The last step was attaching the straps to hold the costume up. This design worked well for me last year on my airplane costumes, so I didn’t reinvent the wheel. I used binder clips to attach the straps to the box. This allows you to adjust the strap size easily before and after the costume is complete. After I was satisfied with the length, I covered the top in red duct tape.

Both sets of rotor blades, on the hat and the tail turned out great and I think making them movable is awesome. You could simply glue them down though if you want. I don’t think it would be any easier though because sometimes glue is messy and doesn’t hold well, so that could be frustrating.

What do you think of my cutie pie Blade Ranger?

I knew I wanted to make new costumes for the boys but wasn’t sure which characters to make until we saw the movie. The boys and I saw an early screening last week and really enjoyed it.  Quinn really enjoyed the movie, and so did I. The film focuses on Dusty training to be a firefighter so he can help out his hometown of Propwash Junction. He heads to Piston Peak and meets a whole new cast of characters including Blade Ranger, the helicopter tasked with training him. If you didn’t see it this weekend, I highly recommend going to see it soon.

“Planes: Fire & Rescue” is a new adventure-comedy about second chances, featuring a dynamic crew of elite firefighting aircraft devoted to protecting historic Piston Peak National Park from raging wildfire. When world-famous air racer Dusty (voice of Dane Cook) learns that his engine is damaged and he may never race again, he must shift gears and is launched into the world of aerial firefighting. Dusty joins forces with veteran fire-and-rescue helicopter Blade Ranger (voice of Ed Harris) and his courageous team, including spirited air tanker Dipper (voice of Julie Bowen), heavy-lift helicopter Windlifter (voice of Wes Studi), ex-military transport Cabbie (voice of Captain Dale Dye) and a lively bunch of brave all-terrain vehicles known as The Smokejumpers. Together, the fearless team battles a massive wildfire and Dusty learns what it takes to become a true hero.

Once you see the movie, your kids might want their own Airplane or Helicopter costume! Stay tuned we plan on making another costume inspired by a character from the new Planes Fire and Rescue movie.

Which Planes Fire & Rescue character would you love to see us create?

Previous Post: « Sunscreen and 4 other ways to stay sun safe
Next Post: My Next Adventure and 13 Weird Alaska Facts »