Thank you, Disney and Pixar for hosting me during the Cars 3 Event. All interview photos courtesy of Lousie Bishop/MomStart.com

During the Cars 3 press event, we sat down with the director and producer of Cars 3, Brian Fee & Kevin Reher. They spoke with us about the movie making process for Cars 3, from the new technology and background research to the movie’s message and casting. Check out these fun Cars 3 facts I am sharing today from Director Brian Fee & Producer Kevin Reher.

They started working on the film in 2011.

2. Technology has greatly improved since the original Cars movie. A new renderer made hyperrealism possible in Cars 3.

We have a new renderer, I don’t know if that means anything to you but we can do things that we couldn’t do on the first film.  We can make things look- we can go wholeheartedly into a sense of realism. We try not to say photo realism because I think photo realism, that would actually be kind of boring, we almost want like a hyperrealism.  We want to be able to control how you feel but we want you to feel like you can smell the air.

I remember sitting with the production designer and that was kind of like one of the main things I kept saying because he’d be like how about this how about this I’d just- I want to make sure you can smell the air.  I mean we can’t smell anything, but make me think I can.  So we went for a lot of atmosphere, you know, like you’ll see a lot of fog and things that are at a distance are so faded- just like the atmosphere between you and the thing that’s miles away, we just kind of dove into those things and we can now, because we can do these things.

We sent the two production designers on a really wintery week, in a convertible Camaro, because they insisted on a convertible I’m like hey you’re going to freeze your asses off all the way from Daytona up through the Carolinas, and so that it wasn’t just, you know, internet research, it was like they really- And then we also went to two different I don’t want to say abandoned tracks.But two tracks that are no longer operable, one which was Occoneechee which was legendary at the beginnings of stock car and then Wilkesboro, which was very influential.

4. The most important message from the movie for them was the mentor/mentee dynamic.

You know, I originally came at this film and for me it still is the most important part for me personally as a parent, my mother passed away, my father is getting older and I looked at McQueen’s and Doc’s relationship as a father and son relationship. Same as a mentor mentee, however people plug into it in their own personal lives.

And I have that moment- middle of my life my mom’s passing away and you kind of feel that safety net that you’ve always had. That moment where you get just a little scared that everything you’ve ever known is kind of dropping.  And then but I have two daughters and I realized I’m their safety net, like they look up to me, I’m playing that role for them and it kind of erased the fear I had of losing my parents, not that I don’t want to see them go, but it gave me new strength that a sense of purpose in life.  So to me I look at McQueen’s on that same transition.

I wanted McQueen to feel that- when he spends most of the film trying to do service to his own career, right, service, the thing that he thinks he’s most passionate about and terrified of losing actually, actually terrified of losing the one thing that brings him the most joy.  And then I wanted him to see that there’s helping someone else do it is actually not only just as powerful but can be more powerful.

5. Open mic sessions of Paul Newman from the original Cars movie allowed them to bring Doc Hudson to life in Cars 3.

Well the Newman Foundation was very generous with us and we told them- we let them know that this wasn’t just a marketing trick that this was really integral to the story, and we had all these recordings of open mic kind of thing that John (Lasseter) had recorded when he was doing Cars One. And so we had a transcript of all this and tried to fashion the story- what was the story- what would serve the story- what line could help us serve the story.  And it’s pretty emotional when you hear it- and then we used the old Doc line, you think I quit they quit on me, which mirrored what had happened to McQueen.

Yeah we originally tried a sound-alike because you kind of want to write whatever you want to write, right? It just wasn’t working it just was no magic it just- and then we decided all right, we have to find the lines, cross our fingers that we’ve got the right lines to help us tell the story.  And so it was just spending a lot of time and finding when we can give Doc something to say. 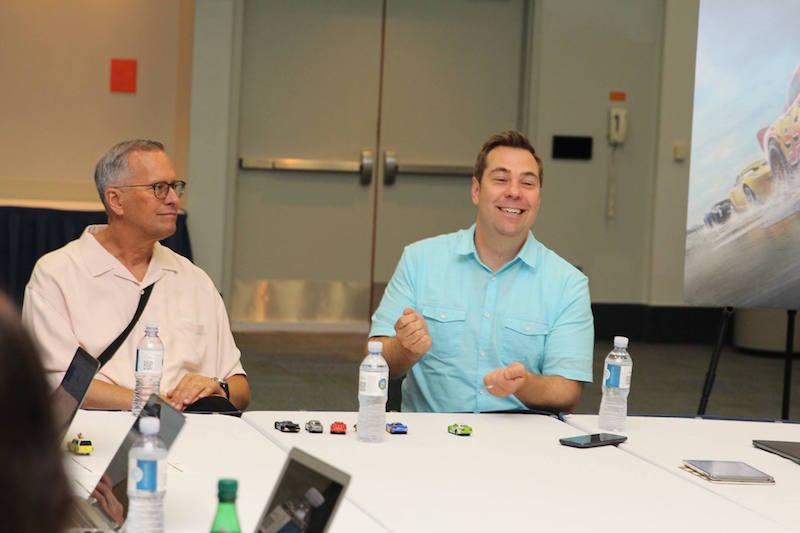 6. Movies never get finished, they just come out.

We’d just kind of keep an open mind every step of the process even in recording actors.  Any opportunity to get a sense of improvisation in the film, which is acting studio is the only place you can do that in animation, to get lines off the cuff that- I remember workshopping stuff with Owen where he would, ‘I don’t know if he’d really say it like that, do you think he’d say it like that’ We’d talk and we’d talk about the purpose of the scene. ‘Okay let me try something, mind if I try something.’ And whenever an actor says can I try something, the answer is always yes, it may not work, but or it may just be the best thing.  And those surprises when stuff got better than I would have ever expected.  So we try to look for those opportunities from everybody on the crew.

We joke about that the movies never get finished, they just come out.

We’re looking for the actors that do it with just their voice, or at least it jumps out.  And we weren’t for whatever reasons, she’s (Lea) really mild, her vocal performance in Orange Is the New Black is milder than you would think when you take her face and her presence out of it, so they weren’t going to work and we knew if we put this in front of John, he was going to say no.

Cars 3 is in theaters now!

Previous Post: « All The Superhero Fun during Summer of Heroes at Disneyland
Next Post: Fun Puppy Party Ideas »