Mickey’s Halloween Party was definitely the highlight of our recent trip to Disneyland.  It was our first time attending the special after hours party and Disney did not disappoint!

We always enjoy the festive décor during Halloween Time at Disneyland but Disney kicks it up a notch for Mickey’s Halloween Party! The live scarecrow near the castle and the spooky mist on the Rivers of America were especially fun. The boys really liked the Piratepalooza décor that included pirates booty; thankfully the coins were glued down!

The main event at Mickey’s Halloween Party is definitely trick or treating! There are multiple Trick or Treating Trails throughout the park. The term “trail” is used because each trail feeds through 5-6 treat stations in that area.  The lines seemed long at first but moved fast! By the way to trail at the back of the park by the Princess Faire and Mickey’s Toontown was the best. It was almost a “ghost town” back there!

We only went through three “trails” and ended up with WAY more candy than we needed. And by me, I mean all 4 of us. Adults are allowed to Trick or Treat too!

Speaking of treats, healthy treats like apples and carrots were available at each station but it seemed random on when they handed them out. I am sure you could request healthy treats but I wouldn’t know since I never did….

Don’t eat too much candy, you will want to save room for a yummy special Halloween treat from one of the Disneyland shops! I seriously *HEART* Disneyland treats! I really wanted one of the Halloween Mickey Mouse cupcakes but the timing never worked out. There’s always next year!

Mickey’s Costume Party cavalcade was a priority for us. Luckily we had just finished trick or treating about 15 minutes before the 1st parade. So we grabbed seats near It’s A Small World and had a snack while waiting for the parade to start!

Seeing the Peter Pan trio (Pan, Hook & Smee) was naturally a highlight for my crew as was Sully from Monsters Inc. And of course seeing the classic Disney characters in Halloween costumes was also super cool. Quinn’s favorites were Chip and Dale dressed as an old fashioned policeman and criminal!

The parade runs twice during the party, once from It’s a Small World to Main Street and then later in reverse. We actually caught glimpses of the second one as we left the park. I definitely recommend watching it, it’s full of Halloween fun!

While we were waiting for the parade to start, we asked a cast member to snap a few pictures of us. Luckily one turned out pretty good. 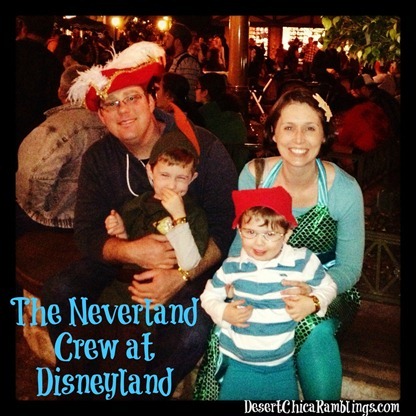 I had hoped to get a picture of my Neverland trio with Disneyland’s trio but it didn’t work out. After waiting 10 minutes at the Peter Pan Meet & Greet, Captain Hook had to leave, so we ditched the line and headed out for more fun!

At least we saw Peter Pan, Captain Hook and Mr. Smee in the parade!

One of the fun things about Disneyland is the cast members go out of their way to help create memories and make things special when they can.

We had a magical moment at the Mickey’s Halloween Party. We were taking pictures at Mr. Toads when a cast member asked if we had ridden Peter Pan yet. We hadn’t because the line was long and are general rule is to avoid excessive lines.

So she walked us through the exit and we were able to hop right on Peter Pan! The ride operator even joked about us “escaping” from the ride. Riding Peter Pan together in costume was another highlight from that night!  I even managed to snap a quick picture as we sailed to Neverland! 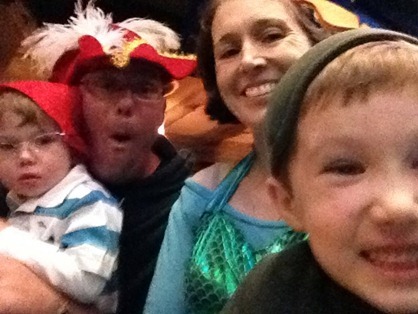 Disclosure: This is not a sponsored post. My family received tickets to Mickey’s Halloween Party for review purposes. As Always, all thoughts and opinions are my own.