As I promised yesterday I have a few more details on the Tiger Lily, Indian Chief and Tick Tock Croc costumes from our Peter Pan Family Halloween! The best news? No sewing is required for any of these costumes. 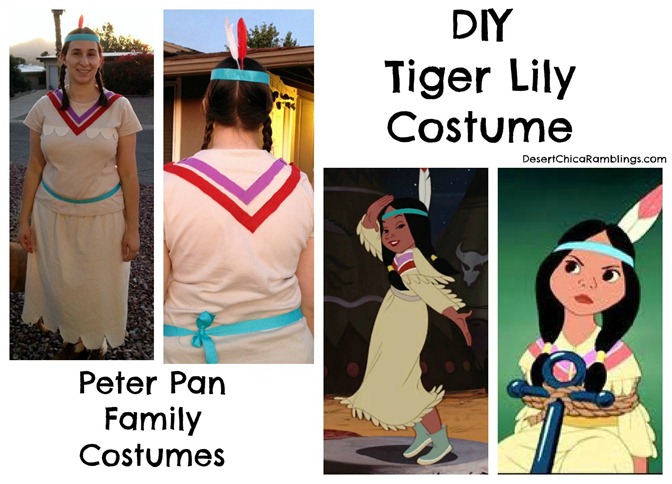 My sister-in-law found a light tan t-shirt and long skirt to mimic the long sheath style dress that Tiger Lily wears. The bottom edge of the skirt was cut to create the fringe look.

Felt pieces were glued to the shirt to create it’s fringe. She also glued red and purple ribbon to the top. Turquoise ribbon was use to create the belt and head piece.  Instead of one large red & white feather, smaller red and white feathers were used to create the head piece look on the cheap!

I don’t have a picture of her shoes but they were her only splurge, blue slippers that worked great for the costume and now around the house!

She used Weldbond to glue everything on the Tiger Lily and Indian Chief costumes. It might have been overkill but it definitely did the trick!

Faux leather strips were weaved to create the headpiece. Then the feathers were pushed through and glued.

Strips of an old t-shirt were glued to long white gloves to create the chief’s signature fringe gloves.

A turquoise piece was attached to tin foiled covered cardboard to create the necklace.

The robe was a too dark but borrowed from a previous Halloween costume so the perfect price. Free!

Some people opt for a more realistic looking crocodile costume but since our theme was Disney’s Peter Pan which is animated, they went with a more “cartoonish” looking Tick Tock.

The base of Tick Tock’s head was a floral wooden ring with a foam ring added about 1/2 way up the head.

The rest of the head frame was built using bendable (12 gauge) floral wire, glue and duct tape to reinforce the connections/corners.

Green fabric was wrapped around the frame much like wrapping a present. They used duct tape to attach most of the fabric and straight pins at the green foam ring.

Foam balls and cones were glued on for teeth and eyes.  There is a little bit of black mesh inside the mouth to allow for some vision (although it was pretty limited) and a piece of red fabric was added for a tongue.

Add a green shirt and pants and you are done! The intent was to create a tail in a similar fashion and make claws but they ran out of time!

All three costumes turned out awesome in my opinion! What do you think?

We had a fabulous Peter Pan Halloween theme this year and are already planning for next year’s theme!