Which Universal Park is better? Honestly it’s a hard decision to make but I am sharing some reason why Universal Studios Hollywood is better (even though its smaller) than Universal Orlando. And also why it’s not better, hint – Harry Potter at Universal Studios…

Just like the question with Disney Parks, everyone has an opinion on which Universal theme park is the best. West Coast parks are smaller but they are the original theme parks. There are pros and cons and no simple answer. I am sharing my opinion on why Universal Studios Hollywood is (and isn’t) better than Universal Orlando.

Why Universal Studios Hollywood Is Better than Universal Orlando

After visiting Universal Orlando a few times recently with my family, I was excited to head back to Universal Studios Hollywood so I could compare the two locations. I already knew the Hollywood park is much smaller having visiting it as a kid.

How big is Universal Studios?

Ok but really how much bigger is Universal Orlando compared to Universal Hollywood? I did a little research and found that the 3 separate theme parks in Florida take up 840 acres. There is also the Universal City walk which seems bigger to me than the one in Hollywood and 7 official Universal Orlando hotels.

Universal Studios Hollywood is only 415 acres and that includes the working film studio. It has a much more compact feel. They also have recommended hotels but they aren’t really themed hotels specifically for Universal like the ones in Florida.

A smaller park might mean fewer attractions but more attractions isn’t always better in my opinion. Bigger parks also means more walking and ‘fluff’ that isn’t worth my time.

Why Hollywood is better than Orlando:

The iconic Universal Studios Tour is not offered at Universal Orlando making it a must visit attraction for all guests. Jimmy Fallon acts as the video host in conjunction with the live tour guide that offers insight into the various sets and sound stages along the tour.

There is no guarantee that you will see anyone famous but because it’s a working studio lot, it is possible. We saw George Eads from the tv show CSI once while taking the tour. There is always TV shows and movies filming so there’s always a chance you can see a famous actor at work. The tour guide will point out active sets during the tour.

The one hour tour has been upgraded over the years and now includes a few 3D experiences including one from the Fast & the Furious franchise. Personally I am not a huge fan of 3D/4D rides but I think this addition is great for everyone else. 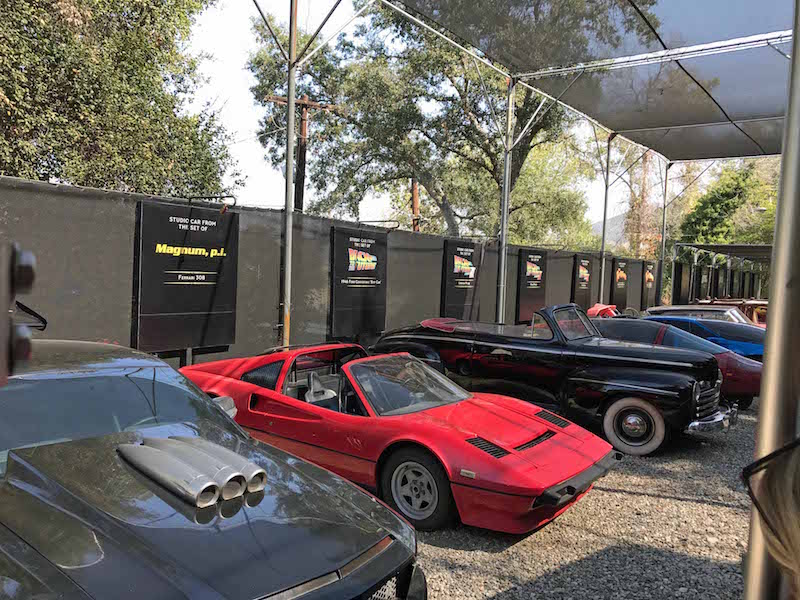 What is Super Silly Fun Land? It’s an interactive kids playground and splash pad and includes Silly, Swirly Fun Ride. It can be a quick stop for little kids that can’t or don’t want to ride Despicable Me Minion Mayhem.

My kids love visiting Super Silly Fun Land and have no problem playing there for most of the day. Be sure to bring a towel or change of clothes if you plan on letting them loose in the water area.

Otherwise, yourself buying obscenely overpriced Despicable Me towels in a pinch, don’t ask me how I know this. 😉

3. The Secret Life of Pets: Off the Leash!

The new Secret Life of Pets ride will open when the park opens back up to guests on April 16th. The ride answers the age old question,  “What are your pets really doing when you’re not at home?”

The attraction will feature 64 technologically-advanced animated figures, allowing you to meet some of your favorite characters including Max, Snowball, Gidget, Chloe and Duke.

My boys love the Secret Life of Pets movies and I can’t wait until we can visit and check out this new innovative ride! It’s located near Silly Super Fun Land in the upper lot. 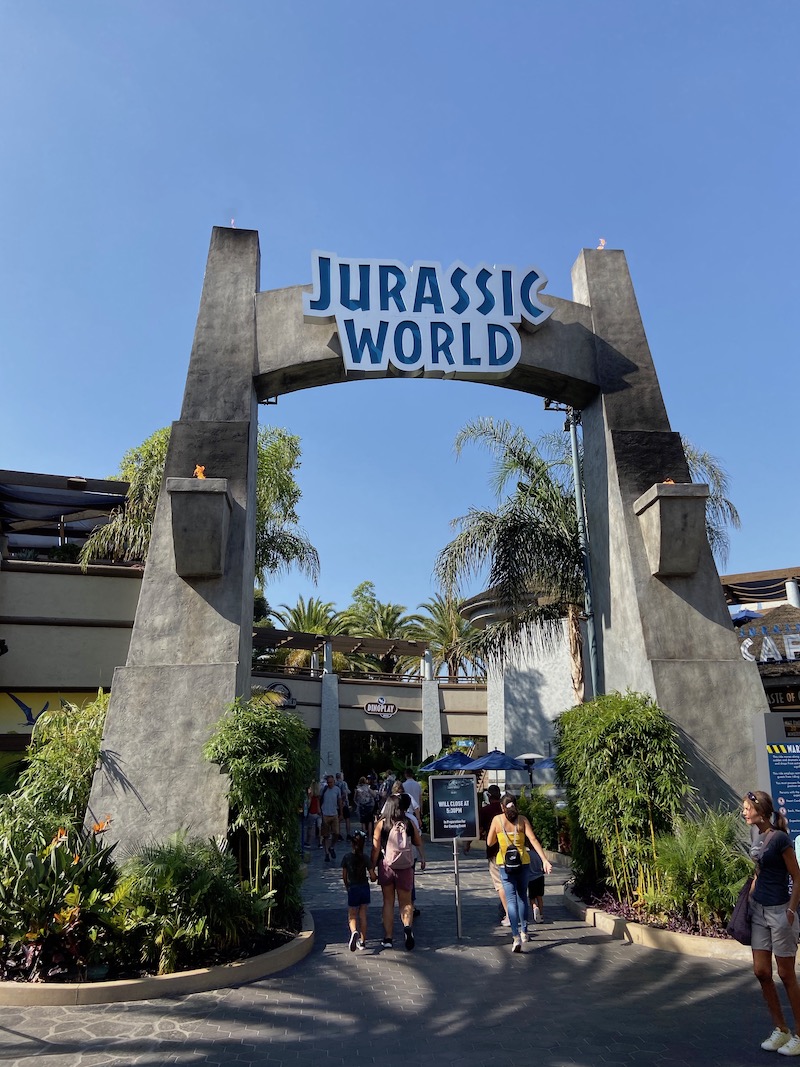 Jurassic World: The Ride opened last summer at Universal Studios Hollywood. We rode it during our fall break trip last month. The ride is updated with references to the new movies but the gist of it is still dinosaur scares and getting wet.

New in 2021 is the addition of the infamous Indominus rex as she battles her arch-rival, the Tyrannosaurus rex in the ride’s finale.

In fact you get wet pretty early on in the ride, it was unexpected and hilarious. I don’t want to explain exactly how it happens and spoil it for you.

Definitely wear a poncho! It will help minimize how wet you get. Also if you will be there when it’s busy or if you are short on time, be sure to buy a Universal Studios Express Pass. The Express pass grants you express access to each ride, attraction and seated show one time, basically it minimizes your wait time.

Springfield, U.S.A. is a great stop in either park for any Simpsons fan. The whole area is completely immersive, featuring locations you’d expect Homer or Bart to visit on the show.

The Lard Lad Donuts in Hollywood features the iconic Big Pink donut, plus several other gigantic varieties that change daily.

We tried a couple of different crazy huge donuts during our visit, they were delicious. Lard Lad Donuts in Florida only offers the giant pink donut, you can also buy other varieties of regular sized donuts in Florida.

Super Nintendo World is under construction right now in the lower lot at Universal Studios Hollywood. We caught a sneak peek of the work underway behind the Halloween Horror Nights Stranger Things maze entrance.

The Hogsmeade locations in Hollywood and Orlando used to be very similar but that all changed with the opening of a new ride in Orlando. Hagrid’s Magical Creature Motorbike Adventure just opened up in Hogsmeade at Universal Orlando and while I haven’t ridden it yet myself, it looks super fun.

Plus at Universal Orlando, there is a second Harry Potter land. You can also explore Diagon Alley which is full of different shops, experiences and the ride, Harry Potter and the Escape From Gringotts. Diagon Alley is actually way cooler than Hogsmeade in my opinion.

Beyond the additional Harry Potter rides there are quite a few additional attractions at Universal Orlando that just aren’t available in California. In fact Universal Orlando is so big, it is actually two different theme parks, Universal Studios Florida and Islands of Adventure. Three parks, if you count the water park, Volcano Bay.

I won’t declare either a true winner over the other though. I think which park is better for you really depends on your family.  What your family likes, where your family lives, and how much time you have to visit the park, all factor into which park experience is best for you.

Save on Universal Studios Tickets & Packages

I am proud to partner with Get Away Today and share their deals on Universal Studios tickets and Southern California vacation packages. My family has booked Disney vacations through Get Away Today since I was a kid, so I know it’s a well-established travel agency. They pride themselves on saving families money and helping plan your perfect vacation. Book online or call Get Away Today at 1-855-GET-AWAY. Mention my promo code DCHICA to get the best prices and you can even save $10 on any 2-night or longer Southern California vacation package.

I received complimentary media admission in order to share my experience with you.