My boys have been anxiously waiting for the new Star Wars Rebels show since we first started seeing commercials for it a few months ago. Naturally, I was pretty excited that my #VeryBadDayEvent trip included a screening of the show and cast interviews. My excitement might have notched up a TINY BIT when I learned that Freddie Prinze Jr. voiced one of the characters, Kanan Jarrus and would be at our press junket. Peter rolled his eyes a bit at my excitement but I don’t think he appreciates 90’s chick flicks as much as I do! 😉

This was my first press junket and I loved how the interview included random topics like 80’s cartoons and wolves. Oddly enough both of related back to the show, Star Wars Rebels. For some reason I expected a cut and dry, formal experience but I loved that our interviews were more like a regular conversation with friends. Don’t you have crazy, random conversations with friends? I’m sharing some of the fun things they talked about during the interview.

Both Freddie and Dave are huge Star Wars Fans and that was very clear from the interview. For those that don’t know Dave was a supervising director on Star Wars: The Clone Wars. Basically he’s a Star Wars legend. It was natural for him to start another Star Wars project with his team. They came up with Star Wars Rebels, an A-Team like group that represents a new era of Star Wars.

Freddie has battle wounds to prove his love of Star Wars. The scar on his chin is from playing Star Wars with his cousin.

“I slipped down the slide when I was 4 years old with a broken flagpole (as a light saber) cause I was Luke and my cousin was Darth Vader. “

Freddie on his character Kanan Jarrus

“He’s not the normal Jedi.  He’s not together.  He doesn’t have it all figured out.  He has maybe 3 answers.  Forget all the answers and then two of them, he’s guessing on.  You’ll literally see him sort of BS Ezra on some of these things that something like Master Yoda would know, there is no try, there’s only do.”

“And just because Leia is in a dress, don’t – don’t trip.  She’s tougher than the guys in all 3 Movies… That existed in the Star Wars world long, long ago.”

Freddie on his audition

“I went in and I saw some Character breakdowns on the wall at Disney and I looked at them and I’m thinking, these guys are either ripping off Star Wars real bad or this is a Star Wars thing.”

Speaking of the Star Wars Rebels auditions. The wolf reference in the interview was because the original script was labeled Wolf Pack, most Hollywood scripts are heavily guarded and have code name. The Wolfpack was also a clone trooper squad during the Clone Wars. Why wolves?

“Well I love Wolves and the farthest back I’ve been able to trace that is the Carol Ballard Film “Never Cry Wolf”  I saw that as a kid and oddly, that’s a Disney Film so that’s kind of a strange cross over… And I’ve always just kind of studied them, their ecology, their survival as an endangered Species.”  Dave supports the International Wolf Center in Ely, Minnesota.

“I’ve always found it interesting that they’re a Predator, that is kind of mislabeled as just a really aggressive creature.  I mean, they are what they are.  They’re not domestic by any nature.  I like the animal and I’m a big believer in kids learning more about the world around them, not judging things at face value but really digging in and say well why do we have these fears and why do we have these prejudices.”

For those that haven’t heard much about Star Wars Rebels. It’s a new animated show that is set between episode III and episode IV in the Star Wars Saga.

The adventures focus on Ezra, a street-smart teenage boy who has joined a small band of rebels that  engage in daring missions of sabotage and resistance against the Empire. Members of this rag-tag group of rebels include Kanan, a cowboy Jedi; Hera, an ace Twi’lek pilot; Sabine, a Mandalorian street artist who happens to be an explosives expert; Zeb, an agile fighter and the “muscle” of the group; and Chopper, the grumpy but good-hearted droid. Together this motley but clever crew of the starship Ghost face threatening villains, embark on thrilling adventures and become heroes with the power to ignite a rebellion.

Disclosure: Disney provided me with an expense paid trip to Los Angeles for the #VeryBadDayEvent and #DisneyInHomeEvent in exchange for my review of the events of the trip.  No other compensation is given. As always, all opinions and experiences are my own. All images courtesy of Disney. 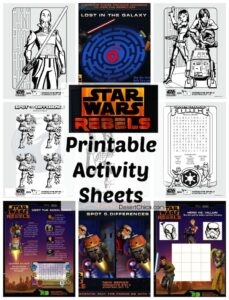