I love Woody and Buzz and all their Toy Story friends, so I am pretty excited about Toy Story 4 coming out this summer! To celebrate the return of Andy’s toys or rather Bonnie’s toys to the big screen, I created a fun Toy Story scavenger hunt at Disneyland.

I spent time at the Disneyland Food and Wine Festival researching all the fun Toy Story things you could see or find at Disneyland and Disney California Adventure. Disney is great at spreading around the magic from their different franchises and Toy Story is no exception.

Before I share the Toy Story Scavenger hunt for Disneyland, I want to point out that you can find a ton of Toy Story fun in Toy Story Land at Walt Disney World. Playing in Andy’s backyard is so much fun but if you are sticking to the West Coast, check out my Toy Story Ideas at Disneyland below.

If you still need to plan your next Disney trip? Let Get Away Today help! They pride themselves on saving families money and helping plan your perfect vacation. Check out their deals on Disneyland and Walt Disney World tickets & packages, you can celebrate Toy Story on either coast!

Of course, if you don’t have plans to visit Florida anytime soon, you can still find tons of Toy Story fun at both California parks. Check out my Toy Story scavenger hunt at Disneyland.

The most obvious place to start on Toy Story fun at Disneyland is by riding the Toy Story attractions.

Tip: Email a free picture of yourself on the ride at the end. I love a good Disney freebie!

This is another favorite ride of mine. I have to admit the competitiveness is quite addicting. The ride features lots of characters from the Toy Story franchise which makes it extra fun. Plus you get to wear super hip yellow 3D glasses during the ride. Toy Story Mania is located on Pixar Pier at Disney California Adventure.

You will find Toy Story Characters represented in both parks but obviously more often at Disney California Adventure’s Pixar Pier.

Who you might see milling around on Pixar Pier will likely vary each day. We have run into Woody, Buzz, and Jessie in the past. The Disney Parks Blog announced recently that Bo Peep will be making special appearances this year to celebrate the release of Toy Story 4 the parks. No word on when she will make her first appearance but I think it will be next month when the movie arrives in theaters.

Tip: Check the Disneyland App for times and locations of daily character meet and greet encounters in the parks.

Find someone Disneybounding as a Toy Story character or go a step further and head to the parks in your own Toy Story Disneybound! Disneybounding is a great way to have extra Disney fun and it’s less cumbersome than an actual costume so your kids might enjoy it more too. 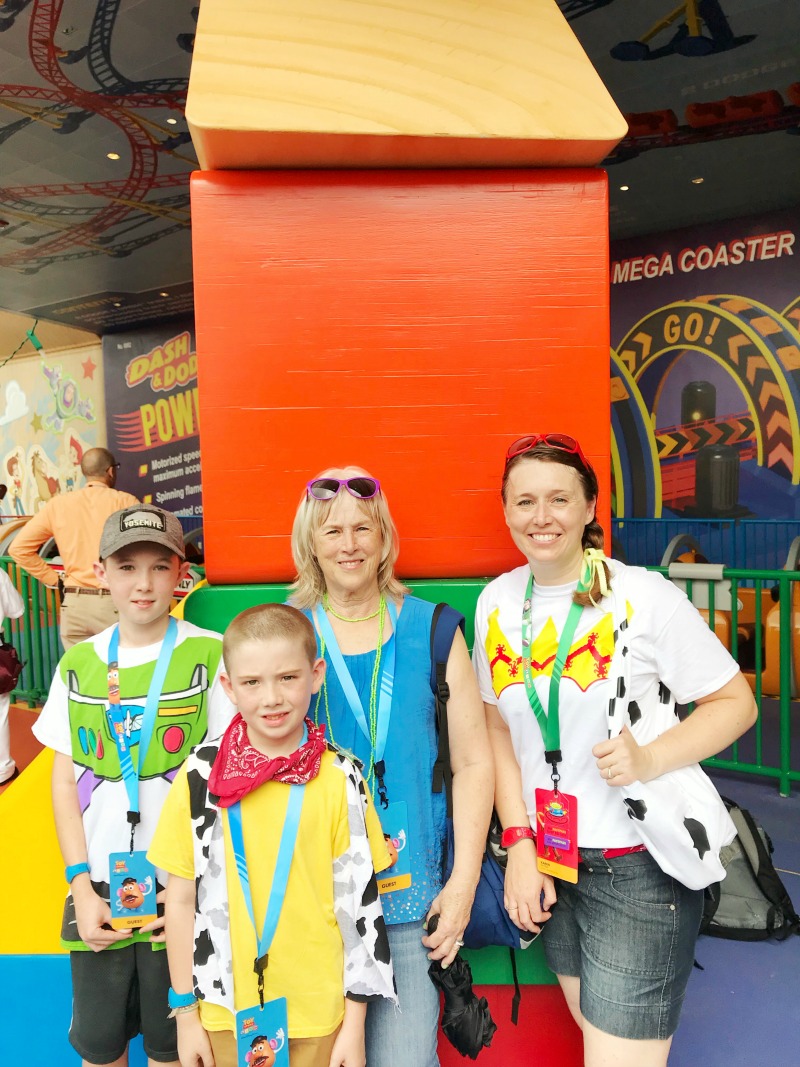 Want to catch a special glimpse of Woodie, Bullseye, and Jessie? Ride It’s a Small World, you’ll find them in the American West scene towards the end of the ride.

7. Take a picture of your favorite Toy Story Hero

8. Take a picture of your favorite Toy Story Sidekick

And naturally, we also need to take a picture of our favorite Toy Story Villain. Mine is easy, I am a big fan of the Evil Emporer Zurg. I am pretty sure you can find a picture or two of the Prospector in Toy Story Mania but I don’t know if I have seen Lotso anywhere lately. If you do see a picture, or souvenir featuring Lotso, let me know.

There is even more Toy Story fun to be found at the Disneyland Resort! Check out the rest of the ideas on my Toy Story Scavenger Hunt. Plus keep your eyes out for

Toy Story 4 features the gang at a carnival, so playing one of the carnival games on Pixar Pier is an excellent addition to the Toy Story scavenger hunt. In fact, there is even one game that features Bullseye, Bullseye Stallion Stampede. If you win that game you can win a Woody or Bullseye prize!

Check out this awesome teaser clip from Toy Story 4 featuring the new characters, Ducky and Bunny attempt Buzz Lightyear’s catchphrase, ‘To Infinity and Beyond”. It’s hilarious. I can’t wait to see more of them in the movie.

Knick’s Knacks is a gift shop on Pixar Pier that is chock-full of Pixar knick knacks and merchandise. This would be a great place to snap pictures of your favorite Toy Story heroes, sidekicks, and villains. I bet we could find Lotso or Sid represented there somewhere.

Tip: Check out the Sketch Artisans at Knick’s Knack and have an original art Pixar images. This could be a great way to snap an image of Lotso or Sid!

Press a penny with a Toy Story design. The designs change sometimes but right now you will find smashed penny designs feature Buzz Lightyear, Aliens, and Zurg at the gift shop next to the Buzz Lightyear Astroblasters ride.

Trade for a Toy Story pin or if you aren’t a trader, buy one. I personally love the thrill of the hunt and always carry a few pins to trade when I visit Disneyland.

Be sure to snack on some Toy Story inspired food. Alien Pizza Planet is at Disneyland and it rethemed with Aliens from Toy Story. Or grab a treat at Senior Buzz Churros.

Are you ready to down your own copy of the Toy Story Scavenger Hunt at Disneyland? You can save it to your phone or print a copy to take with you into the parks.

Keep your eyes out for more Toy Story magic at Disneyland as they are constantly introducing new fun and bringing back favorites like parades, limited time events, and window displays.