I’m headed on another crazy adventure on Sunday, Disney invited me to cover the Jungle Book red carpet premiere in Los Angeles! While I’ve attended a few other Disney film events, I’ve never walked the red carpet before. I have to admit, I’m more nervous about glamming up and walking down the red carpet than rappelling down a 17 story building.  😉

I am wearing flats though, so as long as I don’t trip and fall I will survive! 🙂 The

The #JungleBookEvent starts with a screening of the new live action Jungle Book in Dolby Cinema on Sunday evening. We’ll be sharing our thoughts about the movie (don’t worry, no spoilers) and Dolby Cinema using the hashtags #JungleBookEvent, #DolbyCinema and #ShareAMC. 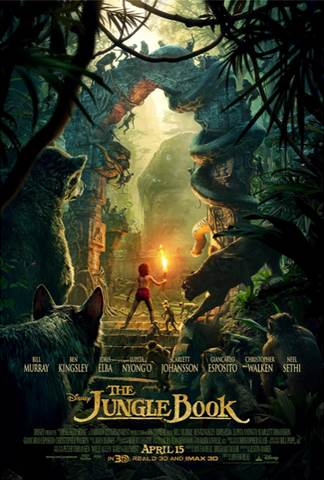 Screening the movie preps us for our interviews with the cast and crew of The Jungle Book on Monday. Follow the event hashtag #JungleBookEvent!

Lupita Nyong’o voices Raksha, a mother wolf who cares deeply for all of her pups–including man-cub Mowgli, whom she adopts as one of her own when he’s abandoned in the jungle as an infant. “She is the protector, the eternal mother,” says Nyong’o. “The word Raksha actually means protection in Hindi. I felt really connected to that, wanting to protect a son that isn’t originally hers but one she’s taken for her own.

Akela is the strong and hardened alpha-male wolf who shoulders the responsibility of his pack. He welcomes Mowgli to the family, but worries he may one day compromise their safety. “Akela is a fierce patriarch of the wolf pack,” says Giancarlo Esposito, who voices the character. “He believes the strength of the pack lies in what each and every wolf offers. He’s a great leader, a wise teacher.”

Next up is Academy Award winner Sir Ben Kingsley (Bagheera). 🙂

Bagheera is a sleek panther who feels it’s his duty to help the man-cub depart with dignity when it’s time for him to leave his jungle home. “Bagheera is Mowgli’s adoptive parent,” says Ben Kingsley, who lends his voice to Bagheera. “His role in Mowgli’s life is to educate, to protect and to guide. My Bagheera was military–he’s probably a colonel. He is instantly recognizable by the way he talks, how he acts and what his ethical code is.”

Mowgli is a human boy who was abandoned in the jungle as an infant. A black panther named Bagheera discovers the lone baby and takes him to a wolf pack, who adopts the boy as one of their own. Known in the jungle as the man-cub, Mowgli grows up among the animals—some friends, some foes—never doubting for a moment that he belongs.Neel Sethi,  now 11, was selected from thousands of candidates following a worldwide search for the perfect man-cub.

Monday evening we will walk the red carpet and attend the premiere of The Jungle Book. Yup, I will be watching the movie TWICE before it opens in theaters on April 15th! Then we head to the official Jungle Book premiere after party. I am sure all the Jungle Book Event bloggers will be sharing fun red carpet and celebrity pics on Twitter and Instagram. Be sure to follow the #JungleBookEvent hashtag to catch all the craziness!

Directed by Jon Favreau (“Iron Man”), based on Rudyard Kipling’s timeless stories and inspired by Disney’s classic animated film, “The Jungle Book” is an all-new live-action epic adventure about Mowgli (newcomer Neel Sethi), a August 20, 2015 man-cub who’s been raised by a family of wolves. But Mowgli finds he is no longer welcome in the jungle when fearsome tiger Shere Khan (voice of Idris Elba), who bears the scars of Man, promises to eliminate what he sees as a threat. Urged to abandon the only home he’s ever known, Mowgli embarks on a captivating journey of self-discovery, guided by panther-turned-stern mentor Bagheera (voice of Ben Kingsley), and the free-spirited bear Baloo (voice of Bill Murray). Along the way, Mowgli encounters jungle creatures who don’t exactly have his best interests at heart, including Kaa (voice of Scarlett Johansson), a python whose seductive voice and gaze hypnotizes the man-cub, and the smooth-talking King Louie (voice of Christopher Walken), who tries to coerce Mowgli into giving up the secret to the elusive and deadly red flower: fire. The all-star cast also includes Lupita Nyong’o as the voice of the fiercely protective mother wolf Raksha, and Giancarlo Esposito as the voice of wolf pack’s alpha male Akela. “The Jungle Book” seamlessly blends live-action with photorealistic CGI animals and environments, using up-to-the-minute technology and storytelling techniques to immerse audiences in an enchanting and lush world. The wild adventure swings into theaters in 3D on April 15, 2016.

Red Carpet Premiere!! Crazy, right? And that’s not all, on Tuesday we are heading to Disney XD for a special screening of the new hidden camera-practical joke series “Walk the Prank.” Plus we will visit the “Walk the Prank” set at Paramount Pictures. “Walk the Prank” features live-action scripted comedy interspersed with fully produced unscripted pranks, the show follows an ensemble cast as they plan and execute hilarious over-the-top pranks for an online hidden camera show. “Walk the Prank” premieres 4/6 at 8:30 pm on Disney XD.

The show sounds hilarious and I can’t wait to see the actors on set and the hijinks that might be happening. I am sure my boys will love a show about practical jokes and pranks!! We will be sharing online using the hashtag #WalkThePrank.

I have been invited by Disney to cover the press junket for The Jungle Book and Walk The Prank. As always, all opinions are my own.