I love to make costumes, sometimes I make fun ones that I love and the boys just indulge me in wearing. I really love when they ask for a specific costume, though, one I know they will definitely appreciate. So I was pretty excited when Quinn asked for a Potterwookiee costume. The Creature from My Closet is currently his favorite book series so I knew he’d love the costume!

Out of all the crazy mixed up characters from Rob’s closet, Potterwookiee is my favorite. How can you top Harry Potter mixed with Chewbacca? Plus the DIY portion of the costume is pretty simple.

The starting point of the costume is a pair of Chewbacca pajamas. The Disney Store sells kids jammies up to size 10, and I’m pretty sure Target sells adult-sized Chewbacca Onesies during the fall. I know because my brother David bought one for his Chewbacca costume last year, he looked awesome and ridiculous at the same time. 😉

You can permanently alter the mask for Potterwookiee with a black marker or paint. We opted to fashion his glasses and lightening scar out of black duct tape since we were borrowing the mask. Remember it’s easier to cut duct tape when it’s attached to parchment paper.

I thrifted a gray cardigan (instead of a robe), it was the perfect color gray and long enough to be a robe on Quinn. I cut it down the middle because Potterwookiee only wears 1/2 of a robe. I added a dark gray patch of fleece to the pocket. Fusion tape or a hot glue gun are my favorite no-sew costume options.

I also added a patch of gold and maroon duct tape. The patch in the picture is fairly nondescript but wanting to be as authentic as possible, I blew up a copy of the book cover and printed it out. I used the template to trace the patch design as close as possible. You could DIY a patch with felt too, I just like working with duct tape. 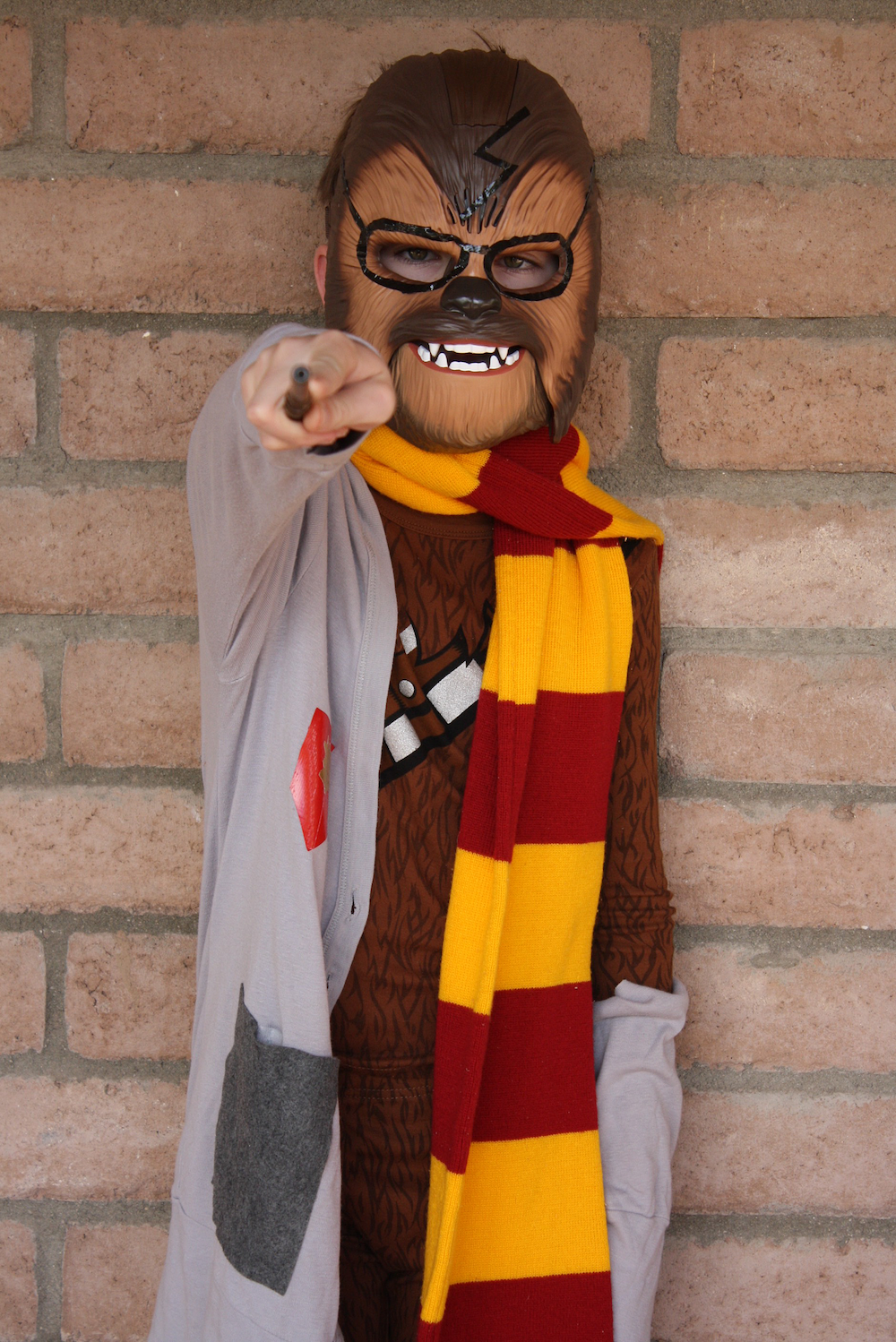 We cut off the extra sleeve (from the discarded half of the robe) at the elbow for him to wear on his left arm. Then he wore tall gray socks on this legs.

Add a Gryffindor scarf and wand and you are all set. We had a wand from our visit to the Wizarding World of Harry Potter at Universal Studios earlier this year. It looks pretty easy to DIY a wand, though. 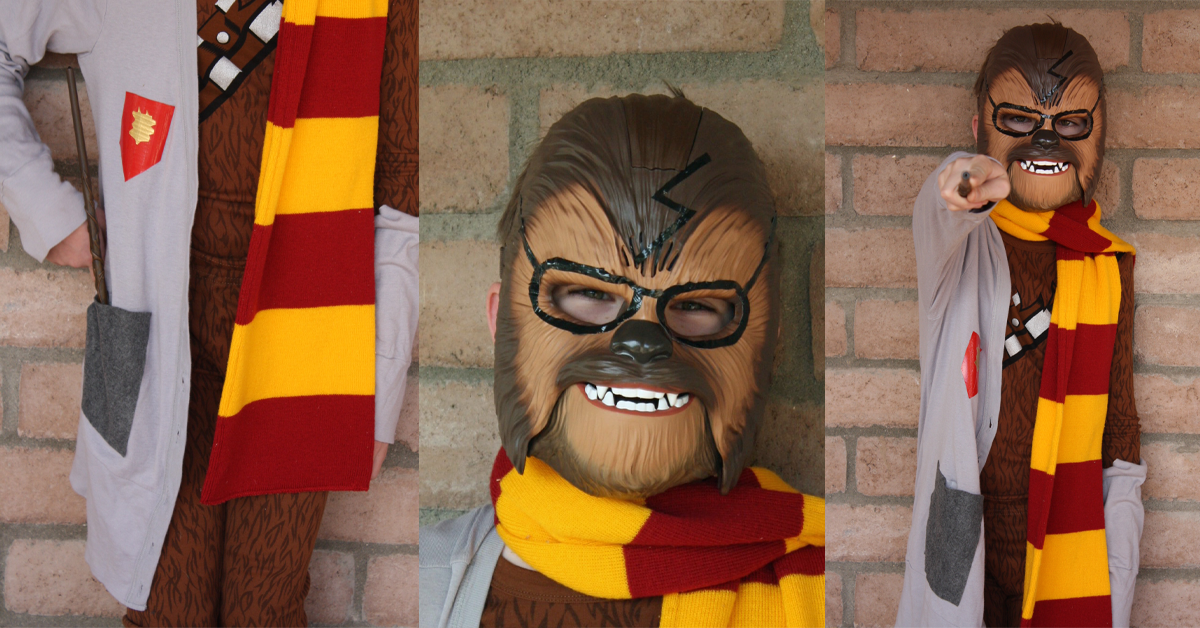 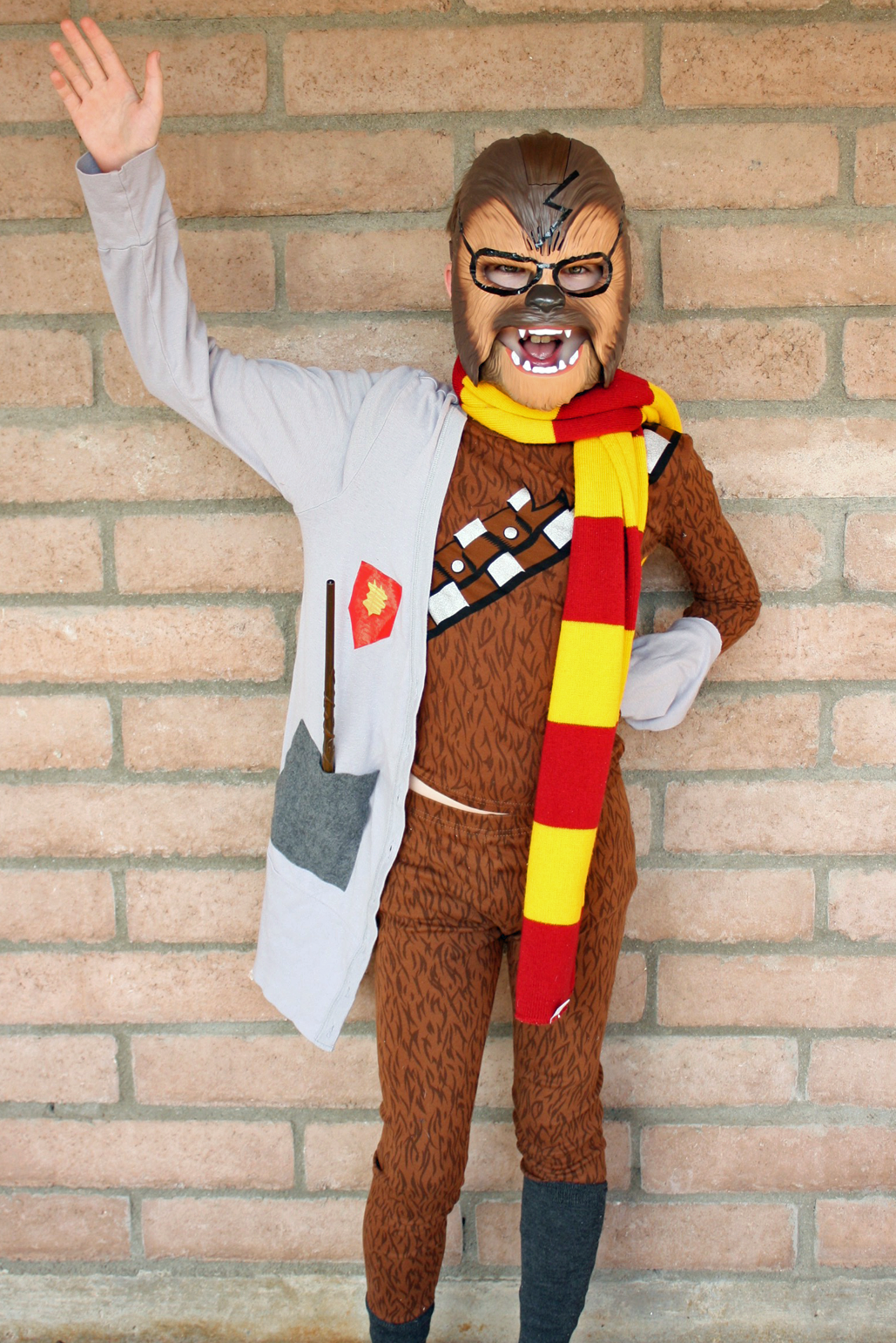 If you have a Creature From My Closet fan at home too, don’t miss my DIY Potterwookiee shirt! Stay tuned for Elliot’s Lord in the Hat costume, also a crazy creature from the same book series!