Earlier this year I took the Walk in Walt’s Disneyland Footsteps tour at Disneyland and got a chance to see inside Walt Disney’s private apartment above the fire station on Main Street USA.

At the time, I remember thinking how amazing it was to get a sneak peek at Walt Disney’s private world. Never in a million years did I imagine I would have the opportunity to tour his family home, the home he along with Lily raised their two daughters. I’m so excited to be sharing some pictures and details with you today!

Walt’s former home in the Los Feliz neighborhood is privately owned and generally not open to visitors. The owners did allow Walt Disney Studios to host tours of the home to celebrate the release of Sleeping Beauty Diamond Edition and Maleficent.

Being allowed to tour the home is almost like winning the lottery, a Disney lottery I never knew I entered! 😉

After walking up the steep brick wall-lined driveway, you face an enchanting home that looks like it’s straight out of a fairytale. Complete with a thick, medieval looking wood door and stain glass windows.

Our tour took place at night which I think enhanced the fairytale look of the property. Light shown through the pretty glass windows over the picturesque front entry.

So here we have a home that is beautiful in detail, has a lot of fairy tale, European-esque accents. Perhaps some of  this is a nod to the Disney family origins… in France where the family originated before immigrating to Ireland and then eventually to North America.

A historic home that is not furnished as it was when the Disney family lived here. But the owners have made a concerted effort to give the feel of the 1930s.

As we walked through the property, we noticed Disney art throughout every room. This is a detail the current owners use to help give a sense of Disney’s creative life at the time he lived there.

The Disney family didn’t actually have Disney art on the walls when they lived here because Walt was surrounded by it all the time at work.

It was truly amazing to walk through the same halls and rooms where Walt Disney and his family lived. Overall the house is spacious and grand without being over the top.  It feels like every little detail was created to tell a story, like a fairy tale you’d want to live in.

The creation of the home itself is a story too, it cost $50,000 and only took 2 months to build in 1932. Walt used both a crew of out-of-work depression-era workers to build the new home and hired a young graduate of the Vienna Academy of Fine Arts to paint the whole ceiling.

The ceilings were truly beautiful and inspiring. The dining room features wood beam ceilings and original ceiling murals with images of sea-dragons and other fantastical, Disney-esque creatures. 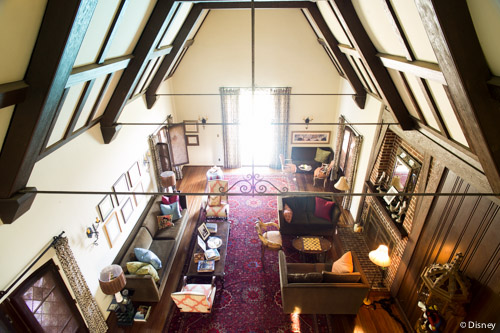 The Juliet balcony was coined ““Christmas Tree Point” by Diane Disney because she (and her sister) would peek down on Christmas morning to get their first glimpse at the Christmas tree and presents.

The outside of the house is just as pretty as the inside. It looks like a cottage straight out of Sleeping Beauty. It really feels like “This is a house where stories are told.”

In the back yard you’ll find the Snow White and the Seven Dwarfs-style playhouse Walt gave to his girls one Christmas. The cottage was complete with a working phone line, electricity and plumbing! “Santa” even called on Christmas morning to ask if the girls liked their new playhouse.

This was where Walt Disney was dad. 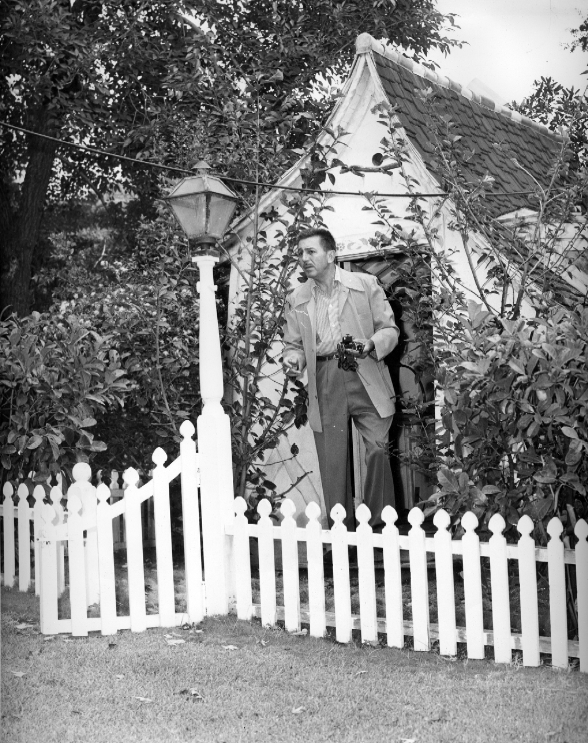 Walt’s library and screening room is where the family had private screenings of films and also previewed dailies of current Disney films in production. We spoke with Sarah Hyland (Modern Family) in this room about her role in a special Sleeping Beauty bonus feature, I’ll sharing more details about that soon!

Upstairs you’ll find the bedrooms and Walt’s exercise room that was later converted into a playroom for his girls.

A special treat for us on the tour was walking into this room and seeing the actual costumes from Maleficent. Ya know that crazy little film starring Angelina Jolie and Ella Fanning, it was *ALMOST* like standing in the same room as them. 😉

Touring Walt Disney’s house was truly a bucket list experience, one I never knew was possible! While the current owners have opened up the house for a few special events, it isn’t a house tour most people will have the opportunity to take. You can still get a glimpse of Walt’s life by taking the Walk in Walt’s Disneyland Footsteps tour or by visiting to the Disney Museum in San Francisco!