Let’s start with how fun the Christopher Robin red carpet was! It was held on the lot at Walt Disney Studios in Burbank which is a little unusual. Having the world premiere at Walt Disney Studios made for a very laid back experience compared to previous red carpet events I’ve attended. Both the Jungle Book and Thor Ragnarok red carpet premieres were held at the famous El Capitan Theater. I am a laid back person, so I really enjoyed having at the studio.

Laid back does not mean lacking in any way though, there was plenty of sweet little scenes set up throughout the party, inspired by the film including a vintage bike with a red balloon, Christopher’s going away picnic and the fabulous beach chairs with the characters sitting in them!

Fun food inspired by the film was served before the premiere, like fish and chips, adorable honey pot shaped cookies, and even sticks of honey from the National Honey Board.

And let’s not forget about the celebrities on the red carpet! My favorite was Ewan McGregor who plays Christopher Robin in the movie. Head back over here tomorrow to read our interview with Ewan McGregor!

Now let’s talk about our fun red carpet fashion, in this case, inspired by the characters from the 100 Acre Wood!

Some people might not know what the term Disneybounding means, I’ve used it before when I shared our Toy Story Disneybounding for Toy Story Land or Disneybounding Ideas for kids. If you’ve missed those posts, then go back and read them, please.  🙂 Disneybounding is when you wear an outfit inspired by a Disney character. Most often people Disneybound at Disneyland or another Disney Park but it can be done anywhere a Disney fan goes, like the Christopher Robin red carpet!

We based our Winnie the Pooh Disneybounding ideas on the more traditional Disney versions of the characters. If you’ve seen previews of Christopher Robin you will notice the characters are more muted in color, similar to a stuffed animal that has been well-loved over time, not a new toy off the shelf.

Winnie the Pooh is the easiest and most iconic character of the group to disneybound as. Pairing together clothes in red and mustard easily suggest a Winnie the Pooh inspiration. A casual version would be mustard color pants or shorts with a red shirt. For the red carpet, Becca paired a mustard colored dress with red accessories.

I chose Eeyore as my Winnie the Pooh Disneybounding character because his consistent negativity is hilarious and he is mostly gray in color. Gray is a color I like and would choose to wear anyway. Disneybounding on a budget is often accomplished by using clothing you already own and then adding a few key accessories. I own plenty of grey clothes and if I was dressing casually and headed to a Disney Park, I’d have a great start on an Eeyore Disneybound from my own closet.

The Christopher Robin red carpet required dressing up a bit more than my standard t-shirt and jeans, so I bought a grey dress and accessorized it with a pink shawl and pink ribbon in my hair, similar to pink ribbon you typically see on Eeyore’s tail. Pink shoes would have been cute but honestly, I couldn’t bring myself to buy pink shoes for one occasion so I stuck to my glittery silver sandals which also worked well. 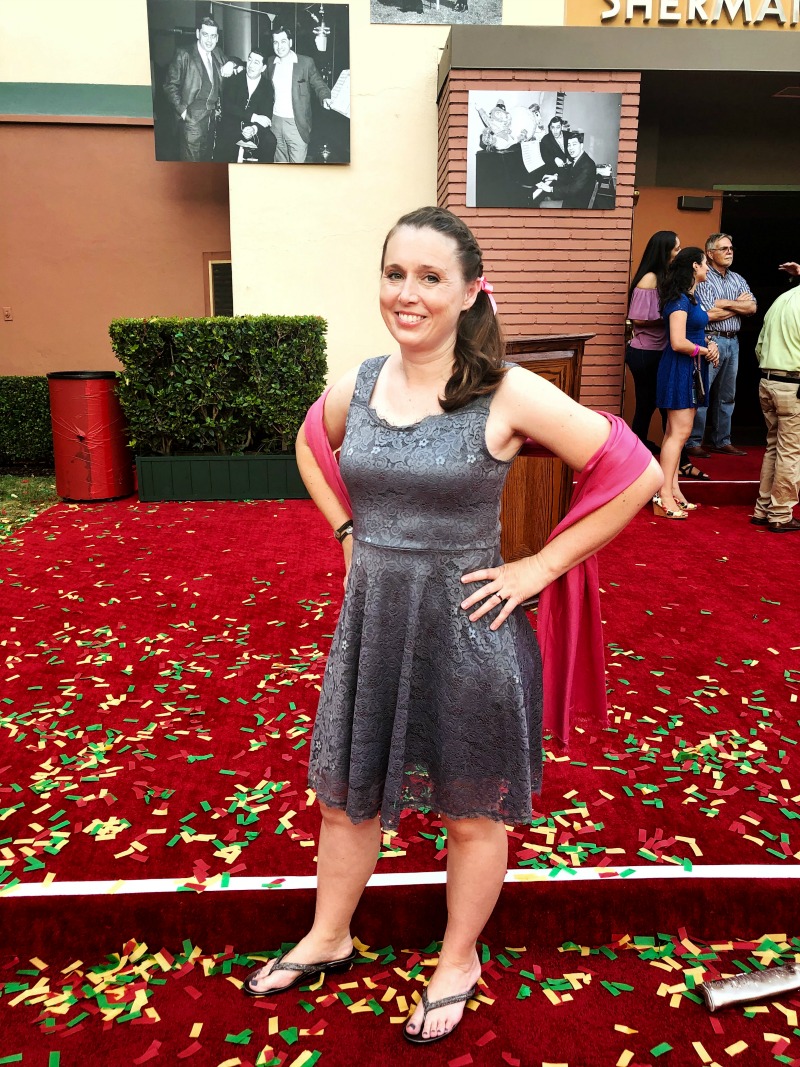 My hairstyle was my favorite part of the Eeyore disneybound since it really paid homage to Eeyores tail and typical pink bow. Thankfully my friend Vanessa, aka Tigger knows how to braid hair well and helped me pull it off.

I’d skip tiger print for Tigger and stick with an orange dress with black accessories. Animal print can be a little crazy and remember we are going for an outfit inspired by the character, not a literal costume or outfit. Vanessa paired a gorgeous orange dress with a black statement necklace.

Piglet is a combination of dark and light pink which is really sweet when disneybounding, especially if you like the color pink. I’d wear one shade as a dress and accessorize with the other shade of pink. Britni wore a dark pink dress with an adorable piglet inspired neckalce.

Disneybounding as Christopher Robin is easy if you keep your look simple and vintage. He is often depicted wearing blue, sometimes also with yellow. A vest jumper dress is the perfect combination of sweet and vintage and works well for a Christopher Robin Disneybound. Sarah pulled off the look beautifully and even added a Winnie the Pooh pin to her dress.

Head over to my friends’ sites for more details on their Winnie the Pooh Disneybounding:

I had so much fun disneybounding on the red carpet, I plan to do it again on my next red carpet adventure!

This post is part of my unpaid press trip with Disney for the #ChristopherRobinEvent.
Previous Post: « Easy Ways To Be A Classroom Hero
Next Post: Ewan McGregor Interview for Christopher Robin »