When I previewed Mickey and the Roadster Racers last year, I knew it would be a hit with my boys. The show mixes your favorite characters from Mickey Mouse Clubhouse with fun (and often silly) race cars. As with all Disney Junior programming, there is also a valuable lesson that your kids can learn from each story.

Add some extra FRiYAY to your Friday with these fun Race Car Party Ideas. From super simple to slightly more complex, everyone will be a winner with at least one of these ideas! 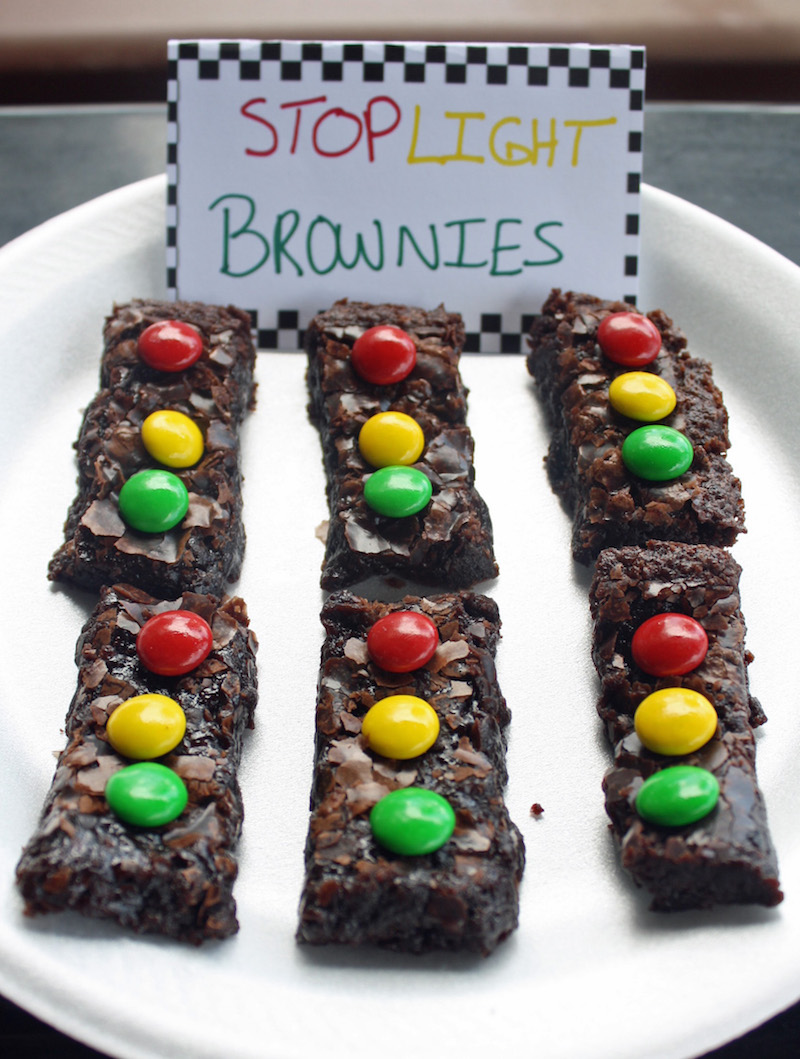 Stoplight brownies are even easier to make. Simply cut a pan of brownies into skinny rectangles and add a red, yellow and green chocolate candy to the top of each one. If you like your treats extra sweet you could frost the brownie first before adding the candy.

I also created a simple race car themed printable food tent to label my stoplight brownies. Go ahead and print your own set of race car party food tents too. I think labeling party food with themed names, makes it extra fun.

Go ahead and print a few of the blank food place cards and create your own fun party food ideas. Some popular ideas include mini chocolate donuts (spare tires), and long veggie crudites or chocolate dipped pretzel rods (dipsticks). Another easy idea is this fun Mickey and the Roadster Racers snack cone printable. Print out a set, roll and tape them into a cone shape and fill them with your favorite party snacks like popcorn or goldfish crackers!

I love the idea of making Roadster Racers Box Cars and turning them into a fun dress up costume. Pair it with the Mickey and the Roadster Racers Hat and you would have a fun Mickey and Roadster Racers Halloween costume! We made Disney Planes costumes out of cardboard boxes a few years ago. Check out those costumes for a tutorial and tips on how to turn a box into a costume.

This is a sponsored post written by me on behalf of Disney Junior.