I love making DIY costumes. Usually, they are DIY Halloween costumes but honestly, I like to make easy DIY costumes year round, it’s fun dressing up for other special occasions like themed parties, spirit week at school, and Disney trips. Or just for the heck of it. 😉 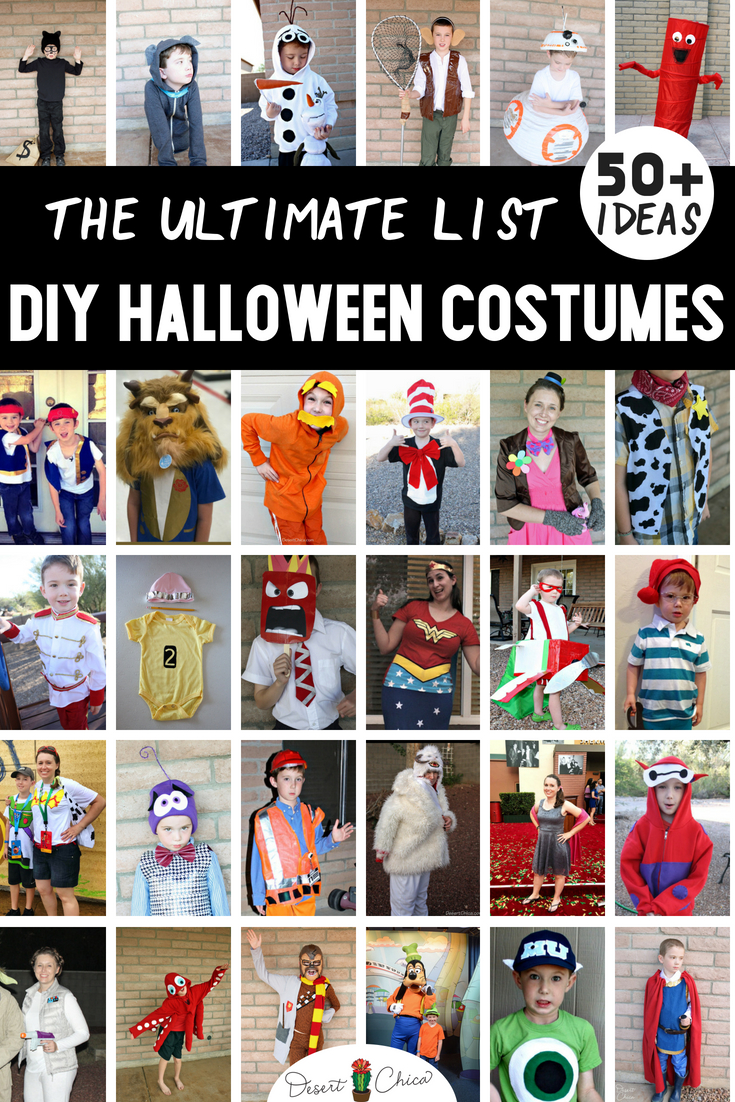 I’ve compiled all my DIY Halloween costumes below separated by category or theme. Hopefully, this will make it easy for you to find inspiration and a tutorial for your next Halloween costume!

If you are looking for fun DIY costumes for any reason, then you are in the right place. I have great ideas for DIY Couples Costumes, Last minute Halloween Costumes, DIY Halloween costumes for kids, toddlers and tweens.

Dressing babies and toddlers for Halloween is fun because you can usually pick out their costumes for them. Of course getting them to wear a toddler Halloween costume for any length of time can be difficult.

Below are some costumes specifically for babies and toddlers but scroll down below for many other costume ideas that can also be made for toddlers.

My boys are now tweens which means sometimes they have particular ideas when it comes to costumes.

The costumes below are great DIY Halloween costume ideas for tweens or teens. Many of the costumes ideas further below would also be great costumes for tweens, depending upon their interests.

DIY book character costumes are a fun reason to make costumes year-round. They work great for school spirit week or love of reading month when schools are celebrating books!

As a Disney loving family, it’s not surprising that Disney costumes make up the bulk of our DIY Halloween costumes and I can’t wait to add more to the list!

Everyone has a favorite Pixar film or two, so naturally, we’ve made quite a few Pixar costumes.

One of my favorite group costume themes is when my family dressed up as Inside Out characters for Mickey’s Halloween Party at Disneyland.

Disney Junior costumes are perfect for the toddlers and younger elementary school kids.

I may seem to only make Disney or Star Wars costumes but sometimes I create other DIY Halloween costumes.

Beyond the book character costumes, you will find some additional costumes we’ve made over the years below.

Most people choose to wear Halloween costumes but Disneybounding is another easy way to dress up for Halloween, parties and other special events like trips to Disneyland and Walt Disney World.

I prefer to make costumes from clothing and craft supplies we have on hand. If I don’t have the clothing I need, I will try and borrow it or find it at a consignment or thrift store first.

I’ve made quite a few costumes using a hoodie sweatshirt so I love finding them for a good price.

I am also a huge fan of duct tape costumes. It’s less messy than paint and also not permanent so the clothes can be used again.

Felt and fleece is also a favorite material because it doesn’t need hemming. When I do need to ‘sew’ something I prefer to use Heat’n’Bond instead. It’s an excellent no-sew option in many situations.

If you still need more easy DIY costume ideas then don’t miss my section of costume round-ups which include some of my favorite ideas from around the web.